9 Years Blogging - Back Again For One Weekend Only

Hello you! It's been ages, how have you been? I hope you've been keeping yourself safe and well during this ongoing pandemic?

It's been about 9 years since I started this blog. How time flies! I feel like I should do some kind of retrospective or something, but life has pretty much stood still for the last 15 months or so, so there isn't really anything to reflect on apart from the amount of time I've spent at home and all of the junk food I've eaten (big thanks to Just Eat and Deliveroo!).

My partner went to visit her family last bank holiday weekend and I decided I was long overdue having some 'me' time. I took the opportunity to be honest with myself, be true to who I am and come out... as a size 16 woman! Eek! Where did size 14 go?!? I just seemed to skip past that!

So I used my weight gain as an excuse to buy some new clothes. It was time to accept the fact that the last few stretchy dresses I owned that I could still fit into were becoming a bit of a squeeze.

I spent ages trying to find clothes that might work for my body shape and size, but that would also cover parts of my body that needed covering and also look age appropriate while still looking a little fashionable. I'm fast approaching my forties and can't really get away with clothes that have bits missing or oversized sleeves.

In the end I settled on a haul from Oasis, which I still find dependable for feminine, flattering (or forgiving?) but still pretty fashionable clothes (to me anyway). Most of this had to be returned as usual, but I kept two of the dresses because I thought they worked really well for me. One can be dressed up or down and was perfect for what I had planned to do that weekend, while the other is just beautiful and I can't wait to wear it on a night out.

After hearing some good things about Jecca Blac's makeup range from a few people I also decided to give some of their products a try since my make up collection was getting old and needed replacing. 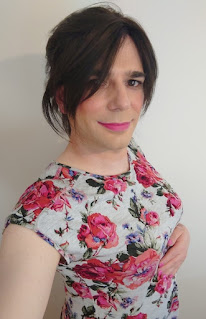 I picked up their complete base bundle with their Blur and Matte Primer, a colour corrector and concealer palette and their contouring palette. I also picked up a limited time bundle with their Hydrate Primer, a pink lipstick in the shade U.R.U and two of their Play Pots in Iridescent and Red Touch. They say you can use these on your cheeks, lips or eyelids. I wouldn't have normally picked up the second bundle as it didn't appeal to me entirely but it gave me a chance to try the lipstick and Play Pots for a vastly reduced price.

So what did I think of them? Well, I don't have a huge amount of experience with primers but they seemed to go on well. My only complaint is that while the tubes look a reasonable size for the money, they only contain 20 ml of product. One of the tubes actually felt like it was half filled with air, which was very disappointing especially given their cost.

I also found that the colour corrector and concealer for the beard area left that part of my face looking slightly yellow even after applying foundation and it seemed to really struggle with my 5 o'clock shadow. This seemed to be even more noticeable when I dressed up for the second day in a row, as my closest shave did not seem to be as effective as it was on the first day. 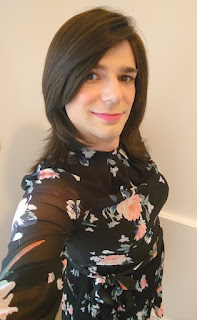 Previously I was using an orange-ish concealer from Bobbi Brown to cover my beard area and that seemed to work better for me. Maybe I need to experiment more with the Jecca Blac products or how I'm applying my foundation (NARS full coverage) to try and get the best out of them, I could be doing something wrong.

The lipstick was nice. It went on a bit dry at first (maybe because it was brand new?) but then the texture turned creamy while still looking pretty matte and it felt nice to wear. When drinking it transferred a lot onto cups but the colour seemed to be very persistent on my lips. I wasn't sure if I was going to like the shade of pink but I do. I also used the red Play Pot as a blush and it went on really strongly, but used sparingly and blended out a bit, I actually really like how it looks, especially compared to the powder blush I've been using up to now.

So my first day was spent trying on my Oasis haul, messing around with makeup and experimenting with various ways to style my wig in an up-do, hating how old I look now (there's so many creases!), and just having a fairly relaxing day taking loads of photos in various outfits including my new dresses, that were almost all deleted because the angle was wrong or my face was showing too many wrinkles or my smile looked weird. There isn't a filter in the world that can save this face unless the camera and pose is just so. 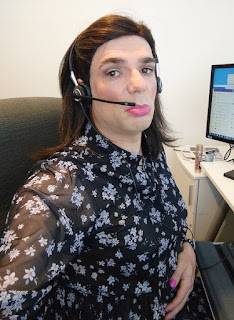 I've been lucky enough to work from home since the first lockdown started which really suits my lazy nature. Since I knew I wouldn't need to be on camera my first day back as I didn't have any meetings booked in, I took the opportunity to spend a second day dressed up in one of my pretty new dresses and looking as nice as possible while working.

I wanted to do this for a few reasons. I wanted to get a feel for a morning routine that included makeup and to see how well my makeup lasts over a long period. But most of all, I just wanted to use it as an excuse to get dressed up nice for a full day because left to my own devices, I often put it off until quite late on. This means I only usually stay dressed up for few hours at a time.

However, I wish a full day did not start at 6am. I did not enjoy getting up at that time just to start getting ready. At all. Not even a little. I haven't had to get up that early in over a year and a half and I almost gave up as soon as my alarm went off, but I eventually managed to will myself out of bed. 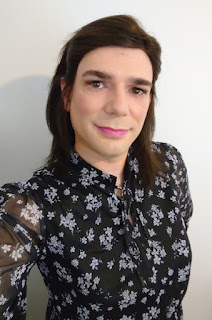 Even though my face felt smooth to the touch after shaving, my beard shadow just seemed to be more visible than the day before, meaning that my base already had its work cut out for it. Annoyingly, it was already quite visible through my makeup part way through the morning and I'm not sure what I can do about that. I also started getting a shiny face about half way through the day. I need to look into what I can do to control that as well.

Apart from the makeup issues, I really enjoyed having an excuse to stay dressed up nice for a whole day. It was comfortable and made the day a bit more fun for me, and made my job slightly more bearable. Slightly.

If I get the chance to, I'll definitely do that again.

As soon as I've got my second jab and when life starts to return to even a semblance of normality, I definitely want to start reconnecting with people again. Whether it's for a coffee, to go to some Trans friendly thing, or on a day trip or night out... I've really got the urge to get out of this bubble. After 15 months of this pandemic I'm so bored!

I only hope my social anxiety can take it.

Email ThisBlogThis!Share to TwitterShare to FacebookShare to Pinterest
Labels: Clothes, Experiences, Make Up