When the gf is away, the girl comes out to play!

I can count on one hand the amount of times I have dressed up this year, but since my other half has gone to her parents and I treated myself the other night, I put the effort in and had a bit of a dress up today. I do love the top and the slippers are so comfy and warm as the fur goes all the way through the inside too!!! 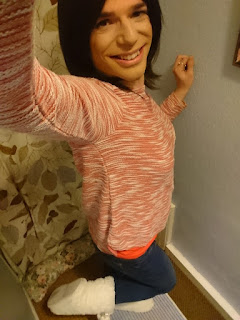 Last night after work I thought I would pop around some clothes shops to see if I could treat myself to something nice and girly this xmas. I was after some pyjamas mainly as I have no girly sleepwear at all but came home empty handed in that regard. I did however find a cute top in H&M and some (fake) fur slipper boots from Accessorize which were both in a sale. I would have been happy to buy more things but im really trying to be ruthless with what I buy. Ive bought a lot of clothes in the past which ive barely or never worn, and its a waste. Having a wardrobe full of stunning party dresses is great if you have parties to go to! 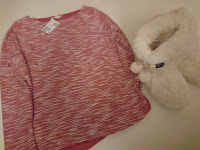 Ive been shopping in ladies shops before while dressed as a guy, and a lot of the time I just try and be confident and push through it, and on a few occasions even outing myself to the staff at a makeup counter. I didnt even need to one occasion but I was feeling brave! Sometimes though there is a niggling feeling or paranoia, and I get very self conscious of being the only guy in the shop, occasionally to the point where I have to turn around and leave.

Last night though I was absolutely fine, I had no issues walking around doing my thing, perhaps the cover of xmas helped. After a while of weaving through aisles of clothes I came to realise that other ladies in the shop were not paying any attention to me at all, they were just going about their business looking for something nice to wear. I also noticed I was not the only guy shopping solo in the ladies sections either, not only that but there were also groups of guys in there browsing and picking things out, presumably as presents for partners or family, but you never know! :)

Looking back I cant think of any time where ive been shopping where staff or other people have given me any impression that they knew who I was buying for (me!), apart from that one occasion last time I was in London where I was trying some ballet flats on and someone working there was watching what I was up to. But I was being pretty obvious then!

I guess the point of this post is to say not to worry too much if you decide to go shopping on your own. Guys buy clothes for the girls in their lives all the time, as long as you arent holding the dress up to yourself, im sure you will be fine. If you are worried, walk around with a list in your hand, have a pre-prepared excuse if you need to (xmas, birthday, etc), but other shoppers and staff wont bother you unless you give them an excuse to. And even if they do figure it out, does it really matter? The staff just want a sale, you might be the subject of their gossip for a bit but thats about it, and as for the other shoppers, who cares! If you are shopping locally though, obviously consider the chances of bumping into someone you know.

I usually shop online and its great if you are worried about being seen in ladies shops, but sometimes its nice to go out and actually see the clothes for real. I was in Topshop and saw a green one shoulder dress I had seen online which looked very pretty, but looked absolutely stunning seeing it for real. I wanted to buy it even though I would never be able to wear such a thing, and its on sale too. Damn it. I wish my hips were just a little bit bigger!