Yesterday I finally got an appointment to see a local makeup artist Jessica at JECCA for some makeup lessons, and found the day incredibly useful. JECCA is specifically for trans people to go for makeup lessons, makeovers, and beauty treatments. Its not a 'dressing service' as such, but she is happy for people to take clothes with them and wigs, etc to see the full effect.

Jessica herself was really friendly, lovely to speak to, very patient with me even if I was rambling a bit (I tend to when a little nervous), and was just nice to be around. She operates JECCA from her family home, im not sure if this is normal a lot of the time but there was at least one other member off her family there, but we never crossed paths. As the changing room was separate to the makeover room, I wasnt sure what I would have said if id bumped into them dressed but with no wig or anything!

All the makeup ive been doing up to now has been based on what I was taught at Sophies about 4 or 5 years ago, which was great. Juliette who runs Sophies is fantastic and if you are around Bath its great to spend a day with her, but I hoped I would be able to pick up some new tips from Jessica as she is a properly trained makeup artist, who does weddings but can also do theatre makeup which is useful for those of us who have to cover things other girls dont. And I was right, this girl clearly knows her stuff. 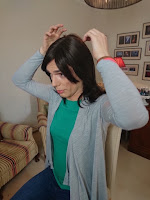 I went for 2 makeup lessons which takes about 4 hours. I was given the option of how to spend this time, and I wanted to try and learn a daytime and evening look. She wanted to know if I had any looks in mind, maybe that id seen in photos or anything, but due to me not coming prepared and my lack of real makeup skill, we decided to keep the looks simple. We decided that she would apply the daytime look so I could watch and learn the basics, then with the evening we would do half and half. 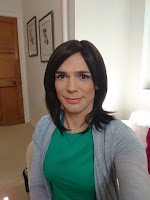 As she went through, she was explaining the colours she was using and what brands, how much product to use, the brushes she was using and why, the technique and so on. She was also happy to listen to any questions I had as we went along, although it was a lot to take in. I was surprised that she does the eyes first, it was always one of the last things I did, but doing it that way makes sense as its easy to tidy up if you make mistakes. She also said that I dont really need to draw anything on my eyebrows as they are dark already, apart from maybe a little on the ends to define them a bit. I then learned a newer technique to cover my beard shadow which is a lot less heavy than the camouflage cream ive been using up to now (and I just bought a new tube!), how to use green colour correct to cover the red patches across my nose, and how much product to apply and what colours to use, as well as contouring which I had never done before. I also learned new ways to use blush, and do my eyebrows, eyeliner and eye shadow. I always found eye shadow difficult due to my hooded eyebrows, but she did a nice job! 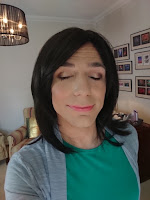 I popped the wig on and then Jessica offered to take some photos of me. And, well, im not great at posing without seeing myself in the mirror, and I have only one or two specific angles of my face that work for me so the photos she tried to take were in my opinion not that great. Not because of her, but because im a terrible model. But, I was very happy with the look, it was very natural. In the end she left me for a few minutes while I took a load of selfies, I always feel awkward taking selfies, but its the only way I can see what my face is doing! 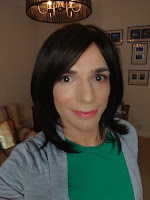 We then moved onto the evening makeup. Jessica touched up one half so it was more evening appropriate, then after taking off half my face, I was then faced with the task of reapplying it. The beard shadow was easy enough to cover, but I did find the eyes a little more difficult. I did botch the darker colour a little bit but with my hooded eyes it wasnt easy to see what I was doing. This is definitely something I need to practice. After this I took some more selfies while Jessica starting writing up some guides on what colours she used on each part of my face, along with a few tips and pointers. She was also happy to write up about what brushes she used that I didnt have that might be needed. 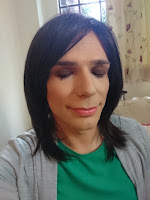 It turned out there was still an hour left, we had finished really early. So as earlier on we had talked about how I tried smokey eyes once and I felt I looked like id just been punched, she suggested for her to have a go and get one more look in before we finish. So once again I was back in the chair while she dabbed at my face, and at the end I was very impressed with how my eyes turned out. I dont think its a look im going to be able to replicate myself anytime soon, but maybe once ive mastered the other techniques I was taught, I might have to go back for a refresher on how to do them.

So after a few more selfies while Jessica was finishing writing up the things I would need from the first two looks, it was time to get changed and go. I had to make one last run across to the changing room without getting spotted (although I was assured that whoever was in the house would be staying out of the way) before packing my stuff. It seemed a shame and a waste after putting all that effort in to take it all off again. I wish I had somewhere to go after to put it to good use. Ah well, maybe another time.

So to summarise, if you are a Cardiff girl or in the vicinity, and you are looking for a makeover, makeup lessons or beauty treatments, I would definitely recommend making an appointment and popping in. I learned a lot while I was there, and I really enjoyed Jessicas company. I need an excuse to go again! Services on offer and prices are available on her website here: http://www.jecca.co/
Posted by a part time girl at 00:22